The Chelation Therapy study conducted by TACT  to assess Chelation Therapy has concluded. Carried out over a ten year period in which time mainstream medicine did its best to trash and halt the trial. It was conducted by the NIH (National Institute of Health) and used methods recommended by the American College for Advancement in Medicine (ACAM).

This was a randomized, double blind, placebo controlled clinical trial involving 1700 patients and was conducted to determine whether EDTA Chelation Therapy would reduce incidences of clinical cardiovascular events in patients with coronary heart disease  and to determine if Chelation supplements have acceptable safety profiles.

Overview of the Chelation Therapy Study

Maintenance: Every 2-8 weeks, for a total of 10 treatments

The following is from the International College of Integrative Medicine

Los Angeles, CA: Chelation therapy for heart and vascular disease is an exciting but controversial alternative therapy that has 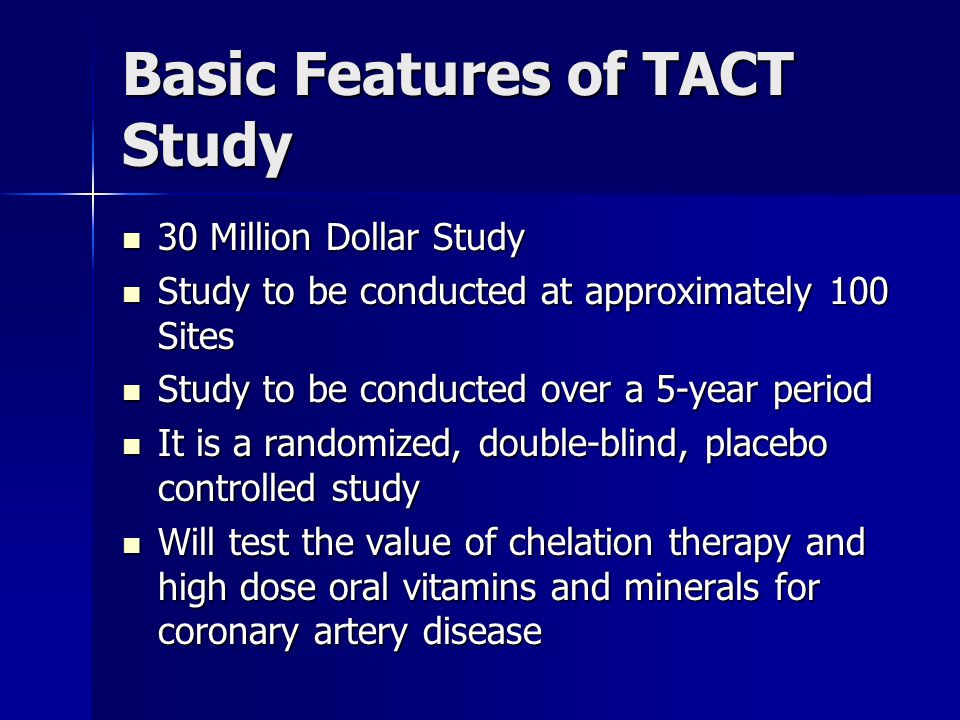 been shown to be safe and statistically effective by TACT (the Trial to Assess Chelation Therapy).

TACT is a 7-year, randomized, placebo-controlled clinical trial funded by the NIH and carried out by university cardiologists and experienced Chelation physicians from around the United States and Canada.  This randomized, double-blind study compared patients who were treated with medications with intravenous Chelation therapy to those with medications but without Chelation. The study showed potentially important improvement in patients who had previous heart attacks and were already under cardiology treatment, especially those patients with diabetes.

The results of this 1708 patient study were presented at the American Heart Association meeting November 4, 2012 in Los Angeles.

Candidates For The Chelation Therapy Study

The patients in the trial were 82 percent male, 94 percent Caucasian and about half were obese. All had experienced a previous heart attack, 83 percent had already had bypass surgery, stent implantation or balloon angioplasty. Thirty-two percent had diabetes, 68 percent had high blood pressure and 73 percent had been prescribed cholesterol-lowering statins. Patients were followed for an average of 55 months. The trial was conducted in 134 sites in the United States and Canada from 2002-2011.

Each patient received 40 infusions, each lasting at least three hours. The first 30 infusions were one week apart. The last 10 were two weeks to two months apart depending on the patient’s schedule. All told, researchers delivered 55,222 infusions. A stringent safety infrastructure made sure patients experienced no undue risk. In addition, the research team worked with a central pharmacy to ensure the safety and purity of the infused products and had in place a computerized system that calculated doses based on the patient’s kidney function and the system sent an alert if an infusion was completed faster than usual.

At an AHA press conference, Paul Armstrong said that TACT was a response to an unusual situation. On the one hand, most physicians and scientists have dismissed Chelation therapy as lacking any evidence or rationale. On the other hand, Chelation therapy is strongly supported by the alternative medicine community and an estimated 100,000 people receive Chelation therapy each year.

This is a positive development for all doctors who practice Chelation therapy. For one thing, the study shows that Chelation is safe if properly administered. Also, our members and friends who practice Chelation can now show that there is support scientific for using the treatment. These two things may seem like small victories, but to some it might be sufficient scientific rationale to offer the treatment to their patients with informed consent.

Many Chelation Therapy studies have taken place on absorption, and the outcome is that liquids far outweigh pill based products. One of the most referred to statements is in the Physician’s Desk Reference, page 1542. In this widely used medical reference book, it is stated that liquids can be absorbed up to 98% against the absorption rate of pills or capsules being 5% – 18%.

Cardio Renew is an oral liquid product and contains the same EDTA as used in the above Chelation Therapy study.