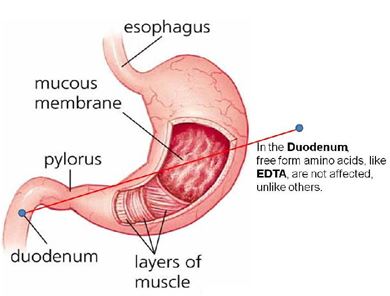 EDTA chelation therapy helps to clean out your veins and arteries.  EDTA grabs a number of unwanted substances that can cause LDL Cholesterol plaque build up and free radical damage from the cardiovascular system, and then renders them harmless, and prepares them for excretion through the urine. Oral Chelation is a natural process that cleans the cardiovascular system, helping the body cleanse the arteries and veins, as well as detoxify the liver and kidneys.

Assimilation of EDTA is effective when taken via intravenous chelation or oral chelation. When taken orally, EDTA, like other amino acids of similar molecular weight, passes through the stomach unaffected where it is then absorbed directly through the epithelium cells of the duodenum. EDTA has been incorrectly referenced by some, who apparently do not understand that the biochemistry and assimilation of proteins, made from chains of amino acids and unattached free form amino acids, all occurs in the duodenum, being unaffected by the stomach and gastric juices.

Stomach acidity has nothing whatsoever to do with the digestion of proteins, which all takes place via enzymatic reaction.  While later in the digestive process, in the duodenum, free form amino acids are likewise not affected.  In fact, the pH of the stomach when secreting HCL is generally around 3.0 (note: EDTA in solution may exhibit a pH of 4.0 all on its own), which has absolutely no affect on the molecular bonds of Free Form Amino Acids (including EDTA) and thus, cannot and will not destroy them.