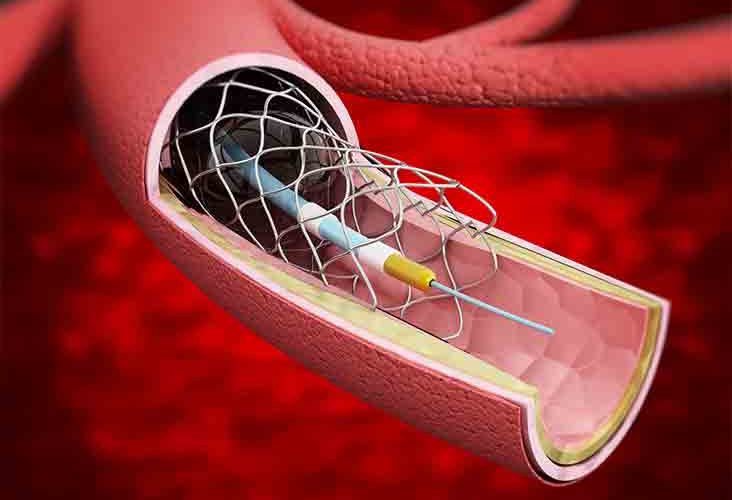 A study in 2007 gave evidence that many people with clogged heart arteries are being over-treated with stents, and that a simple blood-flow test might help prevent unnecessary care.

Fewer deaths, heart attacks, and repeat procedures occurred when doctors implanted fewer of these tiny artery props, using a blood-flow test to decide when they were truly needed, the study found.

Results were published in the New England Journal of Medicine.

Several reports in recent years have suggested that stents and artery-opening angioplasty procedures were being overused in non-emergency cases, often without giving medicine alone a chance to work. Concern about stent complications also has made doctors more cautious about elective angioplasty.
The blood flow test has been around for some years but is used in only about 10 percent of angioplasties now, several heart specialists said.

The study was done in the United States and Europe, and involved 1,005 people who were having chest pain because of reduced blood flow to the heart or were recovering from a mild heart attack.

Similarly, it is estimated that from 44 to 85 percent of coronary artery bypass surgery has been routinely performed without patients even meeting criteria for benefits. Even the American Medical Association admits that 44 percent of coronary artery bypass surgeries are done for inappropriate reasons. Yet mainstream medicine consistently supports such flagrant abuses of surgery all the while ignoring the safe, affordable and effective option that EDTA chelation therapy offers.

Before undergoing non-emergency, elective bypass, stent or angioplasty surgeries, make sure your doctor avails you to all of your options, request a blood flow test, and ask questions, especially with regards to why surgery is your best option.