Hardening of the arteries occurs when calcium and mineral deposits build up and accumulate in our arteries, this is known as plaque which causes restricted blood flow. Restricted blood circulation leads to many problems including angina, heart attack, stroke and general lethargy.

EDTA Chelation Therapy has been shown to remove mineral deposits and especially calcium, the source of arterial plaque.

If you experience any of these conditions EDTA Chelation Therapy could help you.

* Limbs go to sleep or colder than they used to be?

* Aches and pains in legs when walking?

* With slight exertion you get breathless?

What is EDTA Chelation Therapy?

EDTA Chelation Therapy is an approved treatment for heavy metal poisoning, it is used to prevent blood samples from clotting and is also used in the commercial food preservation industry. Chelation Therapy EDTA can be taken orally or administered by IV.

Chelation has also been successfully used for over 60 years by alternative practitioners as a treatment for Heart disease and despite recent positive results from Clinical Trials it still remains outside mainstream medicine. This is thought by many to be the action of large pharmaceutical companies as the patent on EDTA cannot be renewed, decide for yourself!

The temporary treatment from mainstream medicine is to place a metal stent in the artery to squash the plaque against the artery wall, however complications can arise and plaque does return as the stent is seen as a foreign object in the body. It does have it’s place and can be a quick fix in an emergency situation but you still have Cardiovascular disease, the plaque hasn’t disappeared its just been forced back by the Stent at that particular point.

Cardio Renew being a liquid will reach the entire cardiovascular system during the cleaning, it is the most effective way of dissolving small plaque buildup throughout the entire arterial system that surgery can not address. 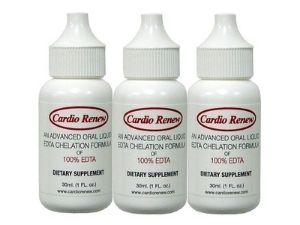 So why should you choose Cardio Renew Oral Chelation Therapy?

* We are the distributors for Europe and countries outside the USA, our stocks are customs cleared in the UK.

* The most comprehensive, fast acting Oral Liquid Chelation Therapy on the market with no added fillers.

* Liquid provides up to 95% absorption, up to ten times more than pills or capsules. Learn more about absorption rates.

* We have been importing Cardio Renew into Europe since 2008.

Take control of your health and order Cardio Renew Chelation Therapy today.
The NIH sponsored clinical trial on EDTA Chelation Therapy has completed, Chelation Therapy reduced deaths from heart attacks by 18%, the largest group benefit was by over 39% for diabetics, see our TACT results page for more information.

Visit our FAQ Oral Chelation Therapy page where most common questions have been answered.